Okay, so February, and the run up to it, has been a mammoth month which is why my blog is so late! On the upside, there's loads going on and lots of exciting news. Where to start?
Well, let's begin with the fact that Club Risqué Book 3 is due for release in two weeks time. So how about a little sneak preview of my cover, before it goes live, just for you?
Here you go! This is 'Ties that Bind' and it is Logan and Luanna's story. 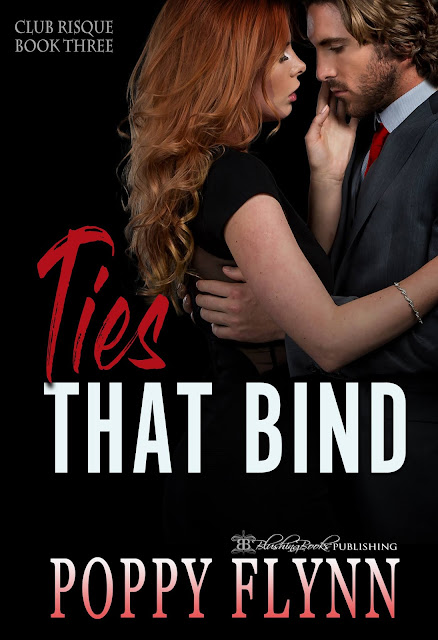 Luanna Morgan has worked hard to brush off the stigma and scandal of being a single teenage mother. These days, she is better known for her calm composure and serene disposition, but despite that, things start to sizzle between Luanna and her company's legal director, Logan Thornton.

But Luanna has led a deliberately quiet and modest life. She knows nothing about bondage or the intricacies of D/s relationships. She's always had to rely on herself, and her current reputation has been hard won. Even if she decides to throw caution to the wind and finally live a little, is there really any room left in Logan's life for yet another love, especially if she can't find it in herself to share the ones he already has?

Logan has Luanna tied up in knots, both literally and figuratively. Is it possible to find a compromise or will circumstances conspire to pull them apart?

So what else, you ask? Well, February also saw the submission of Club Risqué Book 4 to my publisher, Blushing Books, so that is currently being processed and I also finished writing Book 6. That just leaves Book 5, which I am finishing the edits on, as we speak, ready to get that one submitted too. And that's not all! Oh no! As if all that's not enough I currently have Fool's Desire, Club Risqué Book 1 on sale at the special promotional price of just 99p! You can grab a copy using the direct link on the right side of the page 😊

So what else is new? Well, I have two books being featured on this months blog. Fist up we have Entwined by Felicity Brandon.

This is the conclusion of the Dark Necessities Trilogy.

Can a monster ever find redemption? 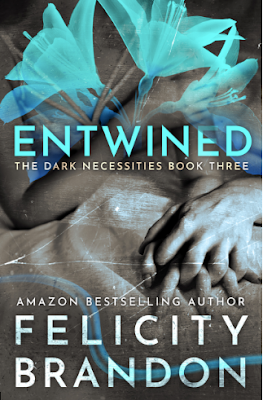 Free from her captor, author Molly Clary finds herself back at home, but she’s just as lost as ever. In the isolation of her new-found freedom, Molly makes a startling revelation; she can no longer function without Connor Reilly. She can’t write without him; she can’t live without him.

The admission leads Molly into the most intense and dangerous chapter of her twisted love affair yet, and by reaching out to Connor again, she must decide if she can really leave her old life behind to venture into the dark and mysterious confines of the organization known only as The Syndicate.

For a couple whose love is built on lust, and fear and submission, there should be no happy ending. But as Molly helps her kidnapper lay his ghosts to rest, the question beckons, can they forge their own brand of happiness regardless? Can Connor finally be delivered into a consensual union with his kitten, and will it be enough to satisfy both of their dark needs?

Buy the captivating conclusion to The Dark Necessities trilogy, and devour this tantalizing finale.


Here's a sneak peak to whet your appetite!

She sighed, a sound he heard despite the wind whipping around them. “This is so fucked up,” she explained,” but I didn’t know what else to do, I…”
Her voice trailed off into silence, and she blinked away the tears which were clearly threatening to fall. Connor’s feet moved before his brain even registered the action, his stride closing the distance between them in just a couple of paces. Molly’s eyes widened at his sudden proximity, her face lifting to look upon him in some sort of dumb-stuck awe. He couldn’t tell if it was terror or yearning which he saw in her eyes, but it didn’t matter. To hell with the mantra; Molly was upset, and that meant he wanted to protect her. Deep down Connor was certain of one thing. She had never stopped being his, and in his normal messed up way, that meant only he was allowed to cause her pain. If she was upset, he wanted to calm her, and comfort her. He wanted to make it better.
“Hey,” he said, towering over her small frame. “Hey, it’s okay.”
Connor wanted to wrap her up in a hard embrace, to hold her close to his body and smell the sweet scent of her hair in his nostrils. He swallowed down that urge, opening his arms out to her in as non-threatening a gesture as he could muster. There was a moment when nothing more happened. Molly cried openly, wiping the tears away with the back of her hand. Her eyes darted from his open arms to the sea, and back to the car she had parked beside his Mercedes. Connor could tell it was quite a predicament for her. Evidently, she wanted to go to him, but she was understandably scared. The last time she had trusted him, she’d wound up gagged and drugged.
Slowly, she edged closer to Connor’s body. He saw her blow out a huge breath as she neared, gazing up into his face as she finally pressed herself against him.
It was a moment of epiphany.
Molly had chosen to come to him, looking for comfort from the one man who’d taken and tormented her. It was like some sort of miracle, and Connor knew he was the luckiest son of a bitch on the planet as he felt her body heat next to him. His arms were on her at once, enveloping her in his warmth in a matter of seconds. His right hand rose to her hair, cradling her head as she sunk down against his chest.
Molly dissolved into sobs, her body trembling with the weight of whatever emotion she released. For his part, Connor said nothing. He merely stood there, holding her body on the wind-swept beach. In a time not so long ago, he had called himself a devil. A monster who preyed on innocent little lambs like Molly, but just look at him now. Connor was the greatest example of disparity he knew. He proved that karma didn’t exist. He’d been a sick fuck his whole life, taking what he wanted under the protection of his powerful peers, and caring nothing for the consequences. He should be damned, and he thought he had been, but he’d been wrong. The greatest penance he could ever have received was to never have seen Molly again. To have never caught sight of her mischievous smile, or run the soft strands of her hair through his fingers. And yet, here was she, her small arms clinging to him as she cried her heart out. There was no way he deserved to be this blessed. No way.

And that's not all I've got in store today!
Also I'm featuring the debut novel from new author RJ Grey, so lets take a little look at this recently release. 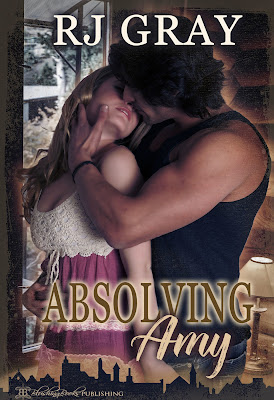 Amy Johnson’s life is a series of bad luck mixed with worse decisions. One of those bad decisions was homicide detective, Ben De Luca. He is sexy, stern, and everything she could ever want, but her past forces her out of his bed and from his life. That is, until she finds herself in the wrong place at the wrong time. Now, she has no choice but to submit to his presence in her life.

Will she accept Ben’s protection and open herself up to his love, or will she allow the walls she has built around her heart to force Ben out of her life, for good, this time?

Publisher's Note: This action-packed romance contains graphic scenes as well as power exchange themes. Please do not read it if this offends you.

Here's a little sneak peak to who your appetite!

“Amy, I have to warn you, right now, that I am not a normal boyfriend. You need more than a protector. You need a Daddy to watch over you, to spoil you and also to keep you in line. I'm just the man for the job. In my relationship, I am the one in charge. This means I am going to take really good care of my baby girl. It also means I'm going to hold you accountable for your actions and the choices you make. When you are a good girl, Daddy is going to reward you and spoil you rotten. When you are a bad girl, Daddy is going to punish you as he sees fit to correct the behavior. I'm going to punish you so that the next time you have to make a similar decision, you look back on it and think, do I want to upset my Daddy? Do I want to see the disappointment in his eyes and feel it on my butt? As your Daddy, I will always give you what you need and a lot of what you want. ”

RJ Gray started writing at the age of five when she won her elementary school’s story contest. Her writing has evolved from short stories about unicorns to books about dominant alpha males and feisty, stubborn females. RJ holds college degrees in both social work and criminology, topics that can often be found in her novels. She has spent the past fifteen years the wife of an Army bomb technician and as such, she has a passion for military and veteran causes. RJ lives in Virginia with her husband, two young sons and their recently rescued beagle-lab puppy.

RJ loves hearing from her readers. You can email her at AuthorRJGray@gmail.com She is quite the social butterfly and you can find her on the internet on her Facebook Page, https://www.facebook.com/AuthorRJGray/ Amazon, https://www.amazon.com/RJ-Gray/e/B07NPSB16C Instagram, https://www.instagram.com/authorrjgray/ Bookbub,https://www.bookbub.com/profile/rj-gray GoodReads https://www.goodreads.com/author/show/18845957.R_J_Gray and Twitter https://twitter.com/author_rj. Another way to keep up with her is by subscribing to her newsletter- https://www.subscribepage.com/rjgray