The Vikings are here!

On this weekends blog I'm featuring just one Viking from the Viking Surrender series, but there are a whole horde of them to be found! 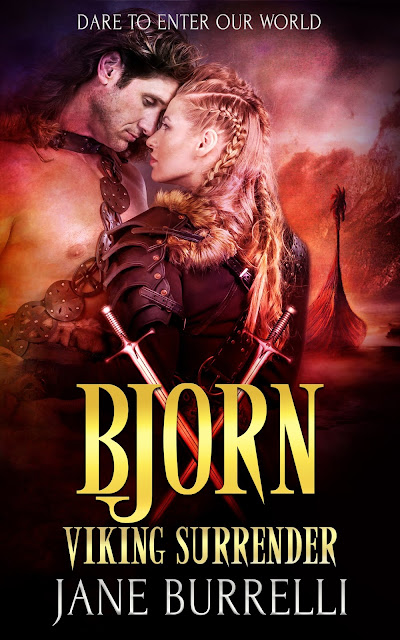 A proud shield-maiden vowing never to be possessed by any man.
A ruthless Viking warrior swearing to tame the bold beauty.
A battle of wills and consuming desire.
But who will conquer who?

A horde of battle-hardened, ferocious Nordic warriors.
A Pictish village at the mercy of its enemies.
A harrowing bargain struck for nine fearful and reluctant brides.

Delivered into Viking hands, claimed and conquered, each bride must accept that she belongs to her new master. But, as wedding nights bring surrender to duty, will fierce lovers also surrender their hearts?

Begin the journey here...
Enter a world of suspense, seduction and adventure, told against the forbidding backdrop of medieval Scotland.

Journey together with indomitable heroes and intrepid heroines, as they discover that the raging storms of fear and passion can transform into enduring devotion.

'Bjorn' is one of nine powerfully seductive romances in the 'Viking Surrender' series.


Fancy a little sneak peek to whet your appetite? Here's an excerpt for you.

“I wish to take a bride,” Bjorn said with his usual directness. Brandr stilled for a moment, clearly shocked by the request. Then again, so was Bjorn. Never since his disastrous marriage had a woman captured his interest for more than few nights, until now.
“Who?” Brandr asked, as if dreading the answer.
“Rhiannon.”Brandr let out a bark of laughter.
“Rhiannon?” he scoffed. “She will gut you before the wedding can take place.” Bjorn bristled at the lack of faith to tame his she-wolf, and make no mistake, she was his.
“She is my choice,” he said simply, stretching to ease the ache that still plagued his side.
“You want to wed the woman who tried to kill you?” Brandr said, slowly running a hand over his face. Bjorn sighed.
“No, I wish to wed the woman who would face down a whole Viking force single-handedly.” Brandr grunted, acknowledging the little Pict’s courage, and Bjorn pressed on. “You said I would decide her fate, and I’ve decided,” Bjorn reminded him, steel ringing in his words. He would not be moved from this.
Brandr quietened for a moment, rubbing a hand over his chin, deep in thought. “She is a beauty, but a reckless one,” Brandr conceded.
Bjorn’s rolled his eyes up to the clouds, his patience was wearing thin. “But she will never be an easy wife,” Brandr warned.

About the Author
When Jane realised that the world was not hiring for a ‘sarcastic but benign Supreme Ruler of the Universe’, she decided to put her vivid imagination to good use and create her own world. Affectionately dubbed the 'sex author' by her good friends, Jane can often be found crafting her saucy tales in her local coffee shop, fuelled by copious amounts of vanilla tea.
Happy Reading!