Guess what? It's been a whole year since my first book was published by Blushing Books.
I've come a long way since the first book in the Club Risqué series was launched with Fool's Desire.
In fact this week sees the release of Club Risqué Book 6 - Captive Heart. This is Micah's story, and I know it's been eagerly awaited by a lot of readers, since we have seen quite a bit of Micah in the previous books, as he is the manager of Club Risqué. I hope I've done him justice, but I have to admit, he is my personal favourite of all the characters I've written so he has a special place in my heart. 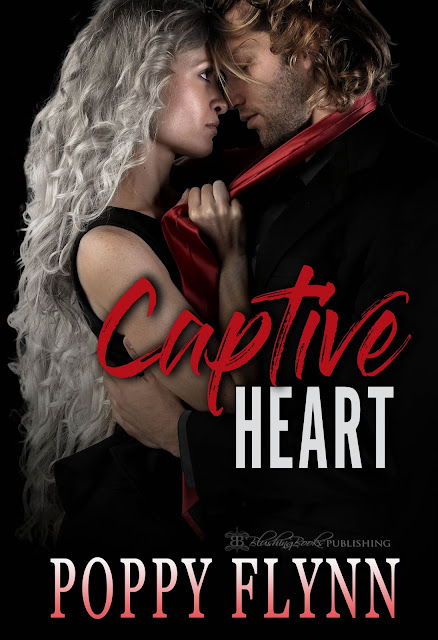 Blurb:
What is a psychologist supposed to do when a bruised and battered woman literally falls at his feet, unconscious, right outside the BDSM club where he is the manager?Micah Flynn is torn. He feels drawn to Melody and wants to protect her from the horror she has escaped from. The trouble is he’s well aware that he has a bit of a saviour complex and is not convinced about Melody’s motivation, either.
Melody has been held in captivity for years. When she finally manages to escape, she offers herself to Micah as his slave because being a slave is the only thing she knows how to be. Haunted by his past, the last thing in the world Micah wants is a Master/slave relationship, but reluctantly, he takes on the role of Master, in name only, until Melody is able to think for herself and stand on her own two feet.
Melody’s feelings for Micah grow as he shows her the first true glimpses of human kindness and respect. The trouble is Micah insists that her feelings for him are simply born of gratitude and refuses her advances in the moral belief he would be taking advantage of her.
Is it possible for the two of them to make the transition from slave...to love?  And what will happen if Melody’s captor discovers where she is?

Publisher's Note: This contemporary romance contains themes of power exchange and graphic scenes. If this is offensive to you, please do not read it.

Excerpt:
"Okay," he sighed, looking down at where she was curled up in his arms like a trusting little kitten. "It's clear that we need to have a frank and honest chat and get a few things straightened out and work on those misconceptions of yours and maybe a few that I might be guilty of harbouring myself. Are you up for that?"
She looked up at him with clear, guileless eyes and nodded solemnly.
"Right," he huffed resolutely. "First of all, yes, I do feel obligated to help you, but that doesn't make you a burden," he insisted. "I would help anyone in a similar situation if it were within my power to do so, and I have no trouble admitting that it would make me feel good about myself in doing it. That's just the way I'm wired. I like to help people."
"So I'm nothing special then," she determined gloomily, looking away from him again.
"Stop it!" Micah chastised. "You are special. Everyone in the entire world is special in their own unique way. Well, with the possible exceptions of ass-hats and dickwads," he countered, drawing a reluctant smile from her as he'd intended. "That aside, I can pretty much guarantee that if you had been a drunken bum or a minor, I would certainly have approached things differently. You are here because it seemed like the right thing to do under the circumstances."
She relaxed into him once again, laying her head on his wide chest and toying absently with the buttons on his shirt in a way that was really quite distracting. A hard-on was one thing he could really do without for the duration of this conversation, but if Melody didn't stop squirming around on his lap and running her fingers idly across his chest, that was the way things would end up going!
Micah adjusted himself surreptitiously and ploughed ahead, determined to keep his mind from wandering in a direction it really shouldn't go in, despite the provocation.
"As far as not wanting you for my slave, you're right..." He felt her flinch and stiffen and pulled her up to face him, cupping her chin in his hands so she couldn't look away. "But that has nothing to do with you or your value or the way I feel about you. It is simply a dynamic that I do not want to endure. I don't want someone in my life who can't think for themselves. I don't want to shoulder the entire responsibility for another person's day to day existence. When I'm in a relationship, I want it to be autonomous and I want the other person in that relationship to care for me as much as I care for them. And I want them to show that care and do things for me because they want to, not because I've told them to. I want unexpected intimacy and surprises and thoughtful little things that make me realise I'm appreciated for who I am, not because I'm a master who has ordered it!" he insisted passionately.
Micah eased back, realising he had let his emotions on the subject run away with him. He felt like he owed her an explanation for them, a small one, anyway.
"You're not the first person to want this from me, and it's not the first time I've balked at the idea."
"It's not? Really?" she asked earnestly, searching his eyes.
"No, I had a girlfriend who wanted the same."
"What happened?" Melody asked tentatively.
Micah shrugged. "She left me," he replied bluntly. It wasn't something he liked to talk about. "She felt I couldn't give her what she wanted so she found someone whom she thought would."
"Is she happy now?" Melody asked shyly, curious, her forehead wrinkling as her eyes widened in what...disbelief? Disbelief that Sara had left him without trying to compromise or disbelief that he hadn't wanted what Sara had offered, the same thing she had offered.
"No," Micah bit out, withdrawing his hands and looking away. "She's dead."

Another exciting thing to happen this week was that myself and five other amazing authors, Kessily Lewel, Chloe Kent, Libby Campbell and Mary Auclair, decided to get together to start our own reader group. We would love for you to come and join us at
Sexy Spanking Authors and Readers

And the excitement doesn't end there! Oh no, on top of all that I have exciting news of not one but TWO book signings that I am taking part in. Admittedly, they're a little way off yet, but it's all added up to make this one heck of an anniversary week.

First up we have the Shenanigans Book Signing, taking place on April 4th 2020 in Telford, Shropshire, UK. You can get your tickets here: https://www.eventbrite.co.uk/e/shenanigans-in-telford-book-signing-tickets-61940204820

The following year, on November 20th 2021, I am going to be signing at Creativity in Birmingham at the Ramada by Wyndham, Sutton Coldfield, UK. Tickets for this should be going on sale at the beginning of September. But you can be sure, I'll post a link in here when they're available.

Who knows, after that, maybe I'll manage to get across the water to take part in one of the wonderful signings in the US. It's definitely on my bucket list.

In the meantime, why not join me and many other great authors for some online fun. I am taking part in several release parties over the next few weeks, so here are some dates for your diary: