It has been soooo busy recently, with so many fantastic new releases as well as juggling my own, But, for today's blog, I'm going to concentrate on my reader group co-hosts.
First up we have...
Taken by the Renegade
by
Sadie Marks 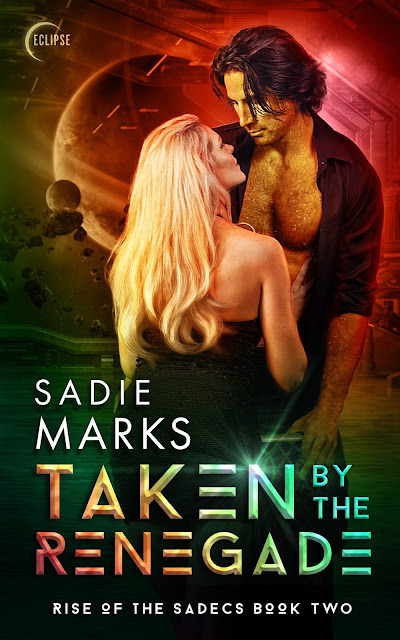 It had been a night she'd never forget. Blindfolded, tied firmly to the bed, with one on each side of her. "Mine," Era'd whispered, with Nikon echoing the word in her other ear just a second later
Sadec claws were drawn down the center of her chest all the way to the vee between her legs. While, from the other side, another set worked their way up from her ankles, the sharp points scratching delightfully along her inner thighs until she was panting, and her hips were rising off the bed in a clear invitation.
They laughed and traded off; now the claws were coming down on the left and up on the right side of her body.  It did things to her body, wonderful things. Inside, there was a delicious fluttery feeling that reminded her of going down a hill at top speed.


Sadie Marks has been in love with Science-Fiction and horror since she was a little girl and when given the opportunity to mix power-exchange romance with sadistic aliens there was no way she was going to turn it down. She is continuing to work on the Rise of the Sadecs series and is enjoying her work on the third book.

Her wide and varied experiences lend a note of realism to the D/s relationships she portrays in her books.
(Sadie Marks is the darker half of Author Kessily Lewel)

Her Amazon page is here:
amazon.com/author/sadiemarks

She also shares an amazingly fun facebook group with four other authors who write kinky romance and would love to have you as part of the fun over here:
https://www.facebook.com/groups/2351026058496857

Ready for some more? Because next up we have...

Bound to the Commander
by
Libby Campbell 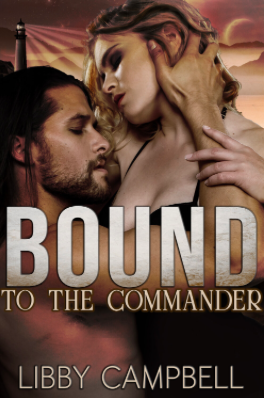 When rumors of twenty-three-year-old orphan Pepper Thornback's incredible healing abilities reach the ruling Tribunal, Commander Quinn Garrick sets out to bring her to the capital. Pepper is given no choice in the matter, and when she attempts an escape during the journey she is taken over his knee for a sound spanking and then stripped bare for a painful, embarrassing switching.More humiliating still, upon reaching their destination Quinn informs Pepper that she will be his ward for the duration of her stay and he will not hesitate to deal firmly with any disobedience.Despite her blushing indignation at being treated in such a shameful manner, Quinn's stern dominance arouses Pepper deeply, and when he takes her in his arms and claims her properly she is left utterly spent and satisfied. But when Pepper makes a shocking discovery concerning the fate of her parents, will the revelation strengthen her bond with Quinn or tear them apart forever?Publisher's Note: Bound to the Commander is a stand-alone sequel to Bound to the Admiral. It includes spankings and sexual scenes. If such material offends you, please don't buy this book.

And it doesn't stop there, finally, we've got... 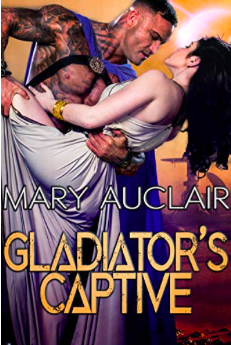 Since I saw him fight in the arena, I have dreamed of him at night. Dreams I blush just to think about. But never did I imagine him carrying me off as his prisoner, spanking me into shameful submission, and then claiming my virgin body so roughly I screamed with every savage climax.

Rager is no ordinary gladiator. He is a Muharib Warrior, a fearsome, terrifying beast, and when my father tried to have him killed he broke free of his chains and took me captive. I thought I would be nothing more than a hostage, a bargaining chip to secure his escape, but I was wrong.

Now Kessily, Libby and I share a reader group along with the lovely Chloe Kent and before I go, there just time to tell you about the
May Day Author Takeover Party
we'll be co-hosting which features no less than seventeen amazing authors. So come along and join us for fun, games, giveaways and prizes at the
Sexy Spanking Authors and Readers
group on Facebook. To join us just click on the name. 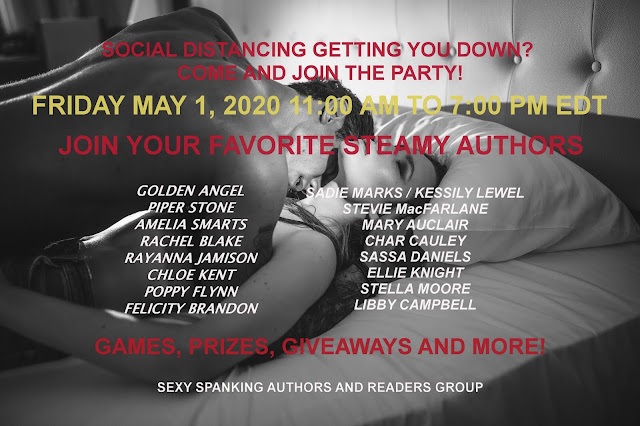